Just like a lot of other Rhythmbox users I like to scrobble my played tracks to last.fm. Unfortunately Rhythmbox provides no way to love a track. The last.fm plug-ins for Windows and OS X have been modified to scrobble through the last.fm client some time ago but the Rhythmbox plug-in still submits directly. That is until now… 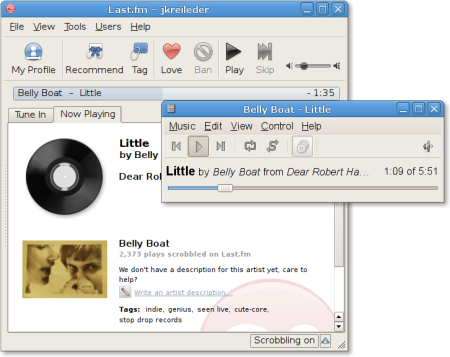 I have written a new last.fm plug-in for Rhythmbox today. Instead of scrobbling directly like the old one, it submits tracks via the lastfm client application. The client displays additional information about the currently playing song and you can love and tag the song with it.

The source code is available as a patch against Rhythmbox 2.90.1 (git snapshot 20120108): scrobbler-v3t.patch
You can apply this patch with:

Ubuntu Oneiric Ocelot users can get precompiled packages from my APT repositories by running these commands in a terminal:

To enable the new plug-in go to Edit » Plugins. Disable the “Last.fm” plug-in and enable the “New Style Last.fm Scrobbler”.
If you enable this scrobbler plug-in, you have to disable the old Last.fm plug-in! Otherwise you will have two plug-ins which will both submit to last.fm at the same time. Only use one at a time!

You might also want to take a look at this thread on the last.fm development forum.

This article Jürgen Kreileder is licensed under a Creative Commons Attribution-NonCommercial-NoDerivs 3.0 Unported License.

Permissions beyond the scope of this license may be available at https://blog.blackdown.de/contact/.

Stay in touch with the conversation, subscribe to the RSS feed for comments on this post. Both comments and pings are currently closed.

Great stuff though, just discovered it.

all installed, but “New Style Last.fm Scrobbler” not appear in edit>plugins (Rhythmbox 0.13.1)

What can I do?

I’m on vacation currently, so there won’t be packages for Ubuntu Natty till Sunday.
Sorry for the delay!

Any plans for natty?

The packages are ready. I’ll put them online later today.

Thanks a lot, man. Can’t wait!

Thanks a lot.
I love how you’ve been updating this since 2007. I thought this was abandoned at first, but then I scrolled down to see Updates. Year 2011 was promising.
Thank you. :)

You should make something like this for Banshee.
I terribly hate the Banshee scrobbler. But I prefer Banshee over Rhythmbox.

Very nice app. Maybe you could think about developing a plugin to sync last.fm loved tracks with rhythmboxdb. I use the VandelayIndustries plugin for Songbird in order to do this, and I still have not found any solution that actually works for RB.

Thank you very much for this plugin, it’s one of the reasons I stick with Rhythmbox. I just wish it was in Rhythmbox by default. I haven’t read the full comment thread in case it’s already been asked, but why isn’t this the case? Excellent work, thanks again!

hi. thanx for the work you’ve done. i’n new to linux. decided to try rhythmbox – your plugin was helpfull)

Could you also provide this for Oneiric Ocelot? I’m using your tool since Maverick – thanks a lot.

Will be available sometime this weekend!

Thanks for this usefull stuff :-)I was missing an Ocelot update !

Why this is not packaged with rhythmbox-plugins yet?

Is there a way I can make it work with the RB version below?
http://www.webupd8.org/2012/01/rhythmbox-finally-ported-to-gtk3.html

I probably should make a stand-alone plugin package for this…
The current patch (v3t) applies to Rhythmbox 2.95 with a little fuzz. So yes, it should work with that version.

(Actually, I do have a Ubuntu precise repository. I just have to update it for the latest Ubuntu builds of Rhythmbox 2.95).

first of all, thank you so much for your work and the great plugin! :)

today, i’ve installed Ubuntu 12.04 final version (which war released today),
it comes with rhythmbox 2.96, so your apt-repo does not work for me and now :(

have you planned to port your plugin to this newer version? would have been very nice!

I had it working fine, but I upgraded to 12.04 (precise pangolin) now with rhythmbox 2.96 and the plugin stopped working. I repeated the steps above and nothing. I suppose the main problem is that “New Style Last.fm Scrobbler” doesn’t appear in the rhythmbox’s components list.

Please let me know if theres is something I should do. Thanks in advance.

Still not working in Ubuntu precise / Rhythmbox 2.96 (and the standard scrobbler skips tracks :/ )

I used “Last.fm for Rhythmbox – New Style” in Lucid without any problem and I love it. I think it’s an important deficiency for Rhytmbox 2.96 and Precise. Please fix this problem as soon as possible.

The plugin can’t be loaded with rhythmbox v3.0.1. Rhythmbox gives the folloing output when I try to activate the plugin.

(rhythmbox:6398): Gtk-WARNING **: Failed to register client: GDBus.Error:org.freedesktop.DBus.Error.ServiceUnknown: The name org.gnome.SessionManager was not provided by any .service files

(rhythmbox:6398): Rhythmbox-WARNING **: Unable to grab media player keys: GDBus.Error:org.freedesktop.DBus.Error.ServiceUnknown: The name org.gnome.SettingsDaemon was not provided by any .service files

(rhythmbox:6398): libpeas-WARNING **: Could not find loader ‘python’ for plugin ‘lastfm_extension’